Joshua Alma Enslen is an artist-scholar residing in Hudson Valley, New York. The two form poems published in this issue of Philos, inspired by the concrete poets, are based on historical events in his home state of Alabama.

The Battle of Horseshoe Bend 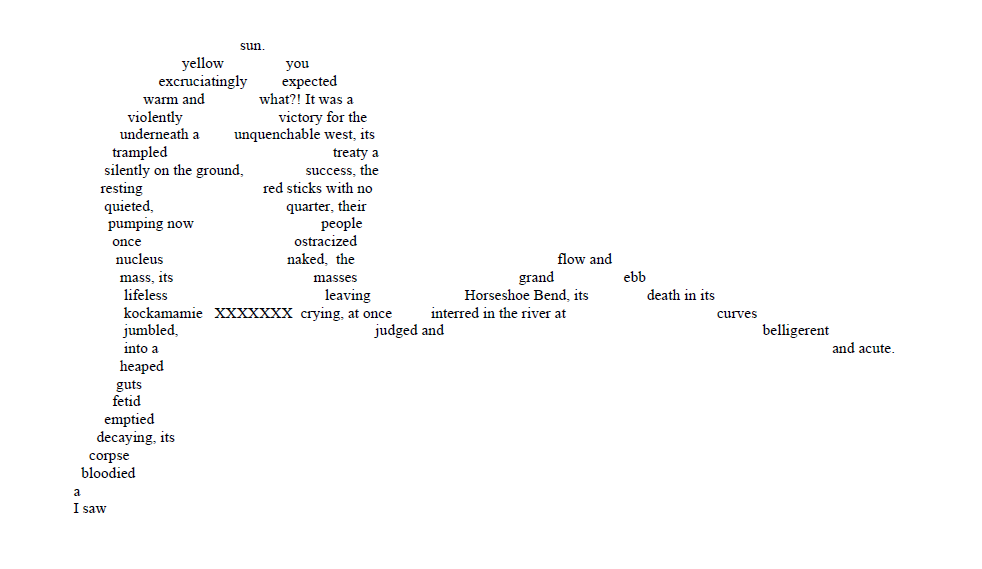 Joshua Alma Enslen, Associate Professor and Program Director of Portuguese, earned a PhD in Romance Languages from the University of Georgia (2008) and holds a Post-Doctoral Certificate of Studies from the Materialities of Literature Program at the University of Coimbra (2016). Joining DFL in 2008, Dr. Enslen teaches courses in the areas of Portuguese as a Second Language and Brazilian literature. His early research focused on the historical connections between literature and diplomacy in Brazil and he has published essays on important writer-diplomats such as João Guimarães Rosa, João Cabral de Melo Neto, and Vinícius de Moraes. His current research focuses on exploring, in visual and narrative modes, the intertextual influence of Antônio Gonçalves Dias’ “Canção do exílio” (1846), one of the most imitated poems in the world. His visual literary studies on the topic, created in collaboration with artist Alaina Enslen, have been featured in solo exhibitions at the University of Coimbra’s historic Museum of Science (2016), at FOLIO 2016 in Óbidos, Portugal and at the University of Lisbon’s Caleidoscópio (2017). His forthcoming book “Song of Exile”: A Cultural History of Brazil’s Most Popular Poem is under contract with Purdue University Press and will appear as Volume 84 of the Purdue Studies in Romance Literatures series. At West Point, Dr. Enslen has served on many committees and, in 2016, received a Superior Civilian Service Award for his work as Associate Chair of the Curriculum Committee during a period of intense revision to the Academy’s curriculum. Dr. Enslen also enjoys serving as a faculty representative for the Men’s NCAA Soccer team.